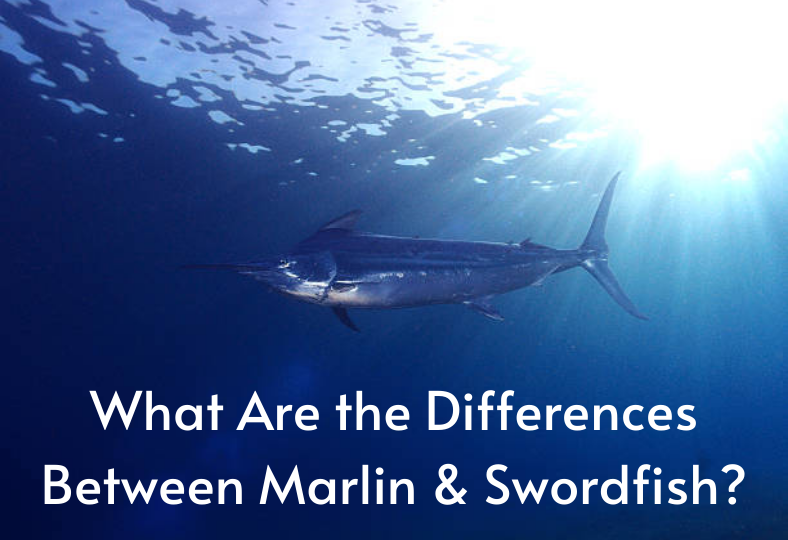 You’ll find some fish that look very similar even if you are a fishing enthusiast or are a keen cook! Even the smallest differences between fish can make the big difference between catching the correct fish that will make a delicious seafood dish and catching the wrong fish and creating something very average. Before getting out on the water to catch your desired fish and taking it home to serve, it is important to be able to distinguish the differences between marlin vs swordfish.

It will be difficult for you to distinguish between different types of fish unless you are a professional fisherman or an expert on seafood. Here are some main differences in the physical characteristics of marlin and swordfish.

The billfish family includes the marlin and is also called the Istiophoridae family. It is commercially fished as a deep-sea/ocean fish. It is also an excellent candidate for extreme fishing, deep sea fishing, and sports fishing.

The long spear and long body of the marlin might be what you recognize. It is easily identified by its large dorsal fin and long upper jaw. Its spear can be deadly, especially for its prey of small fish and squid. They are the most powerful predators in the sea.

There are approximately ten species in total of marlin and they are all closely related to swordfish. The most popular marlin types are the Blue Marlin and Pacific Black Marlin.

The Atlantic blue marlin (also known as Makaira Nikicans) is one of the most massive fish in the world. It can reach speeds exceeding 110 km/h. Imagine this fish speeding next to a speedboat! The blue marlin is also known for its cobalt blue color, whitish underbelly, and its long, deadly spear. According to reports, the endangered blue marlin is in danger of extinction because of several factors, including the plastic pollution problems in our oceans.

Although marlin is generally a large fish, the Pacific Black Marlin is one of the largest marlin species. It can grow up to 5m in length and weighs up to 700kg. Black marlin are usually found in tropical waters like the Indian and Pacific oceans. It’s considered a stronger fish than the blue marlin.

The swordfish is part of the same billfish family with marlin. They share the same habitat (tropical waters in the Atlantic, Indian, and Pacific Oceans) as well as migratory patterns. Swordfish is a large, round-bodied marine fish. The swordfish’s physical appearance is similar to that of the marlin. While some people mistakenly think the dorsal fin of a shark for that of a marlin, they actually look more like sailfishes.

A swordfish, although smaller than marlin, can reach up to 5m in size. This is partly due to the swordfish’s legendary longsword that can extend almost one-third its length. A typical swordfish’s snout is flat while that of a marlin’s is round. The sword is not meant to be used for spearing but for slashing prey.

Female swordfish are larger than male swordfish. Swordfish live for around 15 years, compared to the longer average lifespan of the marlin. The oldest female recorded was 16 years. It can only travel up to 90 km/h, which is slower than the marlin.

Differences in Taste Between Marlin & Swordfish

Marlin is very similar to a swordfish in that it has pink flesh. However, the marlin is not as light. Marlin is a fatty fish because of its naturally high fat content. It has a similar texture to tuna and a stronger flavor. The marlin has a milder flavour than a piece of swordfish.

Marlin should be served sashimi-style. It shouldn’t be cooked through, but cut into thin slices. It makes an excellent Asian-style starter. You can also use the marlin in raw sushi. Or try it Peruvian-style in a Peruvian ceviche.

First, swordfish flesh is lighter and more whitish than marlin flesh. However, sometimes their flesh can turn orange due to high shrimp consumption. This is when the swordfish’s flesh is often sold at a premium.

Swordfish is very well-loved. It is often prepared into steaks that are then grilled. Because the flesh is firm, swordfish can be prepared in many different ways. You can put swordfish steaks on skewers or even make a fish soup that has larger chunks. You can pan-fry, marinate, and eat it as sashimi. When cooking swordfish steaks, it is important to be careful. The fish can become too hot and dry out easily.

Whether you are a lover of deep sea fishing and extreme sports or you are an up-and-coming chef wanting to try your hand at some new seafood, it is important to know the true differences between marlin and swordfish. If you are interested in catching these fish on your own and taking them home to cook, contact a good fishing charter company to learn more about them, how to catch them, and the best ways to share their deliciousness with your friends and family!